Many people know that the German shepherd number 1 is Horand von Grafrath, he was bought in 1899 by a captain of cavalry Max Emil Friedrich von Shtefanitts. However, not everyone knows that he was called as Horand von Grafrath by Shtefanitts and before that he was called Hektor Linksrhein, and certainly not many people know or do not want to know that Horand's maternal grandfather was Greif von Sparwasser, male completely white, which was presented at the Hannover Fair in 1882.

Among the 30 dogs, that have been staple in the breed of German Shepherd, 18 had a white coat, carried a white gene or had white parents. Ever since sometimes the German Shepherd's puppies born with white coat. 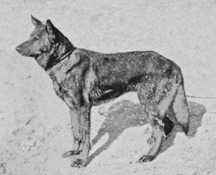 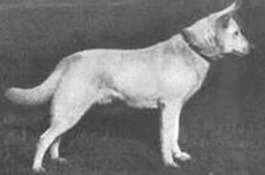 In those years, breeders did not attach much importance to the color of the German Shepherd, pointing up on the working quality of dogs. And the white German shepherds existed on a par with other colors. Max von Shtefanitts did not prefer any color and believed that the coat's color does not affect the suitability of the work and health of the dog.

However, by the mid 30-ies of XX century the influence of the "father of the breed" has not been so strong, in 1936 he has died. By this time, the requirements for service dogs have changed, and German Shepherds miss mark already. It was necessary to find the "guilty". And gene of white color was noted as "guilty" by breeders. Gradually, this point of view was widespread and white color was adopted as disqualified. Finally at the 60s White German Shepherd was proclaimed an "outlaw". But this applies only to Germany and the foreign clubs who took the German standard of the German Shepherd.

By that time In America, it had already been well-formed white German shepherd and American breeders did not want to give up this breed. They based their action on the fact that real scientific evidence that whether color affects health or working qualities of dogs does not exist. Science has found that the white color is the result of a recessive gene that does not lead to changes in the character and the anatomy of the dog.

To save the white German Shepherd in 1964 was founded "Club of White German Shepherd» (WGSC) in Maryland (USA). In 1976, the club renamed "International Club of American Shepherd", and in 1977 the name changed to "International Club of White German Shepherd» (WGSDCI). In addition, in Canada in 1970 based "White Sheepdogs Canadian Club » (WSCC). Thus began the struggle for preserve white color in the breed. Despite the discrimination of color, white shepherd breeding continues, not least due to their great success in the film industry. But during the "war years" much has been lost, and the people were not yet ready to fully accept the white shepherds. Recognition White Shepherd as a separate breed, unconnected with a German Shepherd has not been made at these years yet. History of the breed in Canada proceeds just as in America.

By this time the White Shepherd in Europe practically disappeared. References to the White Shepherd are very rare in these years. Sometimes one puppy survived and found his place in life as a pet. But with the end of the 60s the situation was beginning to change.

American stud dog Lobo White Burch, born March 5, 1966 was brought to a Swiss by Mrs. Agatha Burch and could be considered as the progenitor of the breed in Switzerland. The descendants of this dog were entered into the Swiss Stud Book (LOS). Soon Mrs. Agatha has imported another white shepherd-bitch, at this time from England. She was called White Lilac of Blinkbonny. Agatha Burch was breeding dogs with the prefix Shangrila. 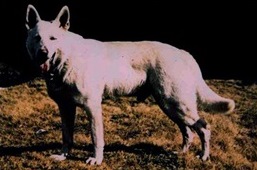 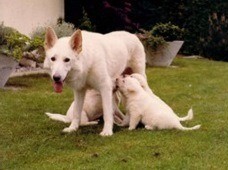 Puppy from this couple was bought Swiss Mr. Kurt Kron. In 1980, Martin Faustmann bought a puppy (male) from the kennel of Mr. Kron (Kokes Mahalo and Shangrila's Sweetgirl, she is daughter Lobo White Burch), and took him to Germany. It was Champion von Kron and his impact on the European breeding of white shepherds indelibly.

Danish family Timmermans brought two dogs from Canada: Hoofprint Utopia and Hoofprint Ocan. From mating these two dogs was born King Misty of the first Choise. Unfortunately Hoofprint Ocan died young due to car accident. Through his son, he also had a great influence on the development of the breed in Europe. 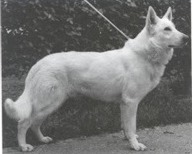 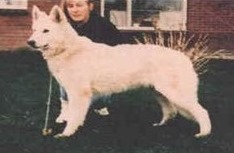 After some time, two dogs Bergeron's Patton and Winter Palace Masterpiece that have been born in Canada, arrived in Holland.

As a result, a large number of purebred (several generations) white shepherds spread throughout Europe. And the dogs are listed above were among the representatives revived the herd of white sheep dogs in Europe.

In 2003, the breed was recognized by FCI, but breed's name was changed - according to the classification FCI now called "White Swiss Shepherd".